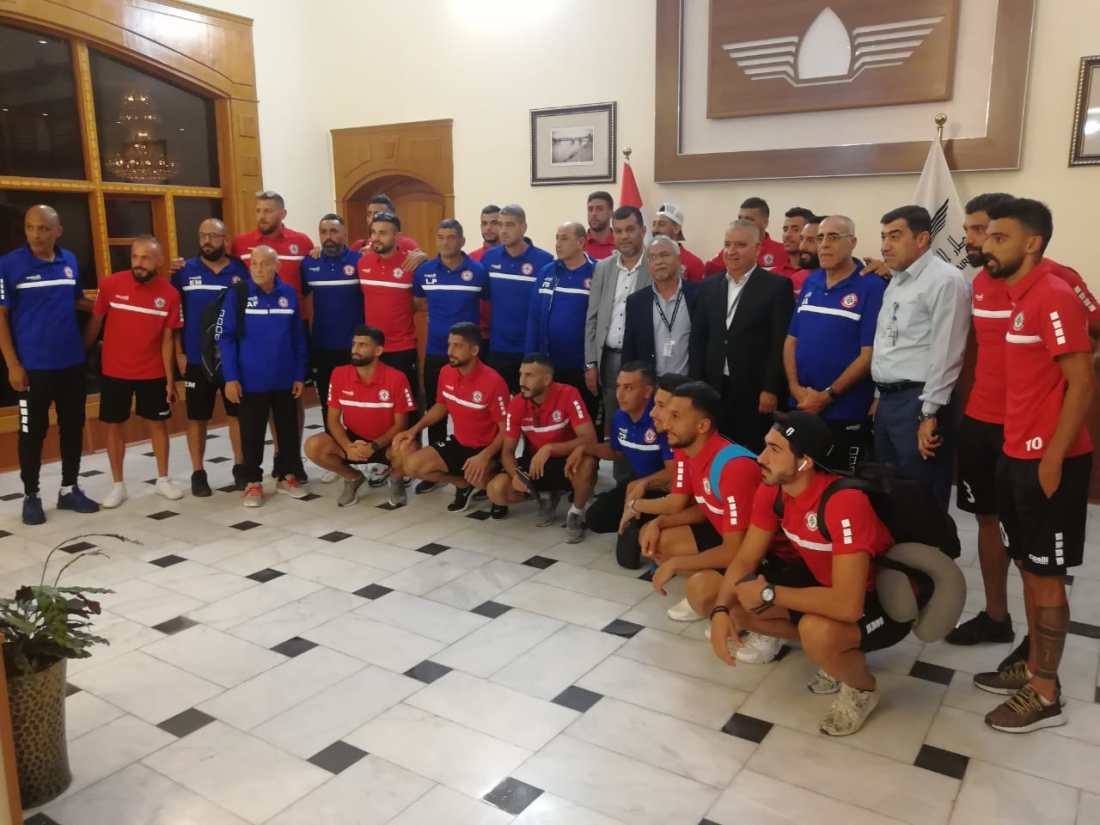 The Lebanese national team is in Iraq ready to participate in the 2019 West Asian Championship. This tournament represents the Cedars’ first bit of action since the 2019 Asian Cup back in January, and the first bit of action for new Romanian head coach Liviu Ciobotariu, meaning that loads of people will be tuning in to see what this “new” Lebanon looks like.

The tournament begins on the 30th of July, ends on the 14th of August and comprises of 9 teams split into two groups. Group A includes hosts Iraq alongside Syria, our beloved Lebanon, Palestine and Yemen and will see all its games take place at the Karbala International Stadium. Group B games will be played at the Franso Hariri Stadium in Erbil and is made up of Saudi Arabia, Jordan, Bahrain and Kuwait. The two group winners will face each other in the final.

As this tournament falls outside of the FIFA international break, clubs were not obliged to release players, meaning that most teams are participating almost exclusively with domestic-based players. It is indeed the case for the Cedars, who will be without Vissel Kobe centre-back Joan Oumari, Al Khor defender Alexander Melki, AIK midfielder Felix Melki, Dunav Ruse midfielder Samir Ayass, Hajduk Split midfielder Bassel Jradi, SV Meppen striker Hilal Al Helwe and Sutton United striker Omar Bugiel. Lebanon will also be without Ahed captain and National Team mainstay Haitham Faour after he announced his retirement from international football a couple of days prior to the squad announcement.

For his first squad as Lebanon head coach, Liviu Ciobotariu went with a pretty standard squad, although there were a couple of surprises. Regular number one Mehdi Khalil will be accompanied by his usual deputy in Salam Zgharta goalkeeper Mostapha Matar, as well as Nejmeh’s Ali Al Sabeh who earned a first call-up. Ciobotariu surprisingly left out teenager Hadi Mortada, who not only finished second only behind Mehdi Khalil for clean sheets in the league despite playing for relegation battlers Tadamon Sour but also started all three of Lebanon u-23 qualifiers in March and is clearly a huge talent that would benefit from the experience. Ali Hamam was also left out after being the starting right-back for so many years, although this was less as a shock and should finally see Hussein Zein, the best right-back in the country for the past two season, being given the starting berth. Safa captain Mohammad Tahan will compete with him for that spot, with the only recognised left-back in the squad being Hassan Chaito Shibriko of Ansar, another player who is long overdue an opportunity to be in Lebanon’s starting eleven. The decision to take five centre-backs, including Ahed’s 24 year-old Khalil Khamis who has performed admirably this year, represents the Cedar’s strength in that position, with fellow Ahed centre-back Nour Mansour being joined by Nejmeh’s Kassem Zein and Ansar duo Moataz Jounaidi and Hassan Bittar. With Melki, Faour, Ayass and Adnan Haidar all out, options are considerably short for central midfield, hence the surprising selection of Yehya Al Hindi despite his very little experience and the fact he has been without a club for the past month. Ahed’s emerging star Hussein Monzer is one who should excite Lebanese fans, as is Nejmeh’s Ahmed Jalloul, who may very well be the most underrated player in the squad and who is arguably one of the best. Nader Matar keeps his place in the squad, as does Mohamad Haidar, Rabih Ataya and Hassan Chaito Moni, but there is a return for Soony Saad, after he revived his career with Ansar since joining them in January. With the absence of both Helwe and Bugiel, we will be seeing three new strikers lining up for the Cedars in Iraq. Ali Alaaeddine is a very physical target man but it remains to be seen whether his style suits international football, while Mohamad Kdouh has been on fire with Ahed in the AFC Cup and represents the typical poacher. But it is Ahmad Hijazi, who has been the top scoring Lebanese striker for the past two seasons and has been terrorising domestic defences with his pace, intelligent movement and lethal finishing, who should be favourite for a start in the opening game.

Although this might not be the strongest squad Lebanon have ever had by any means, observers will learn a lot and it is definitely a positive that there are so many new faces and several players who have been promoted from the u-23 squad, especially after we went to the Asian Cup in January with the second oldest squad. However, while fans are looking forward to seeing these fresh faces and the youth being given a chance, Lebanon enter this tournament having had very little preparation. Indeed, this tournament takes place in the middle of preseason, and a lot of Lebanese players still have a long way to go to reach their peak fitness level. This will make things difficult for the Cedars at this tournament, with them having had only 6 training sessions in three days with the full squad to prepare for the first game against the hosts. In addition to this, Ahed players only began their preseason training in mid-July, after having finished their previous season at the end of June, and are entering the tournament having no games under their belt. Lebanon are therefore not physically ready for this tournament, and Liviu Ciobotariu and his staff are going to have a big job to make sure they manage the players properly.

Nonetheless, this tournament gives new head coach Liviu Ciobotariu a great opportunity to get to know his players, start to implement his philosophy, and work on a system in preparation for the World Cup qualifiers which begin on the 5th September. It will be interesting to see whether Ciobotariu sticks to the back five which was common under Rdaulovic’s reign or whether he brings us back to a back four. Other question marks for Ciobotariu going into this tournament include how he is going to fix our attacking woes, especially with a completely new set of strikers, whether we will finally see young players being given the chance from start and how will he replace newly retired midfielder Haitham Faour, especially in the absence of Felix Melki and Adnan Haidar. This tournament will give everyone a better idea of what kind of coach Ciobotariu is, and what Lebanon will look like while he is in charge, and whether he will satisfy fans’ desire to see a more adventurous and offensive Lebanon or stick to the more pragmatic and defensive tactics employed by his predecessors.

There are clearly many things to look out for at this tournament from a Lebanese point of view, and the first game for the Cedars is in fact the opening game of the tournament against hosts Iraq, who are one of the favourites to win the competition being on home soil. Iraq are obviously a very strong side, although their recent record is mixed. At the Asian Cup in January, they began with a 3-2 win over Vietnam and a comfortable victory against Yemen, before drawing 0-0 with big rivals Iran and finishing second in the group on goal difference. They were then knocked out by eventual winners Qatar 1-0. Since then, they beat Syria and Jordan to win the International Friendship Championship on home soil, and then lost 2-0 against Tunisia in a friendly match in June. Like Lebanon, they too are missing numerous key players because they play with clubs abroad, including star striker Mohanad Ali, MLS-based duo Justin Meram and Ali Adnan, and Persepolis midfielder Bashar Resan. Iraq are participating with a very young squad containing numerous players who have very limited experience when it comes to international football, but they still have a few big players such as goalkeeper Jalal Hussein, talented youngster Safaa Hadi, and exciting winger Humam Tariq, who will provide Iraq’s greatest threat going forward. Iraq are typically a strong team which are very resilient and very hard to beat, relying on the individual ability of their best attacking players to win them games. They will definitely be favourites against the Cedars in the opening game and will be backed by a huge home support for what is the first official international tournament on Iraqi soil since FIFA lifted the ban on games being played there. Iraqi football is on the rise and their league is quickly becoming one of the best in the region, having recently seen one of its clubs, Al Zawraa, participate in the AFC Champions League for the first time since 2008. But there is a lot of talent in the Lebanese National Team and there would be no better way to start than for Ciobotariu to achieve a good result against Iraq. Lebanon has always had the talent to succeed, but the key has been to overcome the inferiority complex that often exists when we compare ourselves to the football teams of our neighbours. If Ciobotariu can manage that and get off to a good start, excitement will quickly build in anticipation to the World Cup qualifying campaign.

View all posts by Nadim Afiouni

Lebanon’s u-16 girls are CHAMPIONS again 🏆🇱🇧
Ahed SACK Marmar!
Today we get our first look at the two newest additions to the NT: Daniel Lajud & Gabriel Bitar
Thank you Pele for everything🇱🇧💛🇧🇷
I didn’t grow up watching him & yet I grew up admiring him, inspired by him & feeling him whenever I kicked a ball.
My team of the tournament for the 2022 Qatar World Cup